Jacques Gagnon had many pictures of his uncle in uniform but he could not figure out what it was all about. Since Archives Canada sent me his service record, I knew where these pictures were taken. 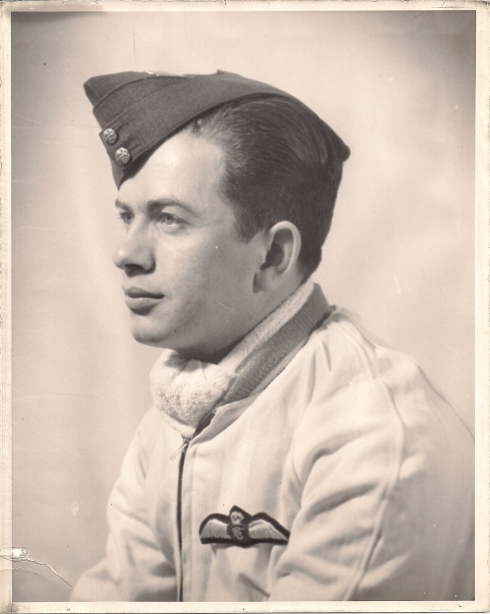 I knew what it was all about having researched all of Eugène Gagnon’s military service with the Royal Canadian Air Force. After he got his wings he was posted to Paulson, Manitoba with No. 7 B&G training school. 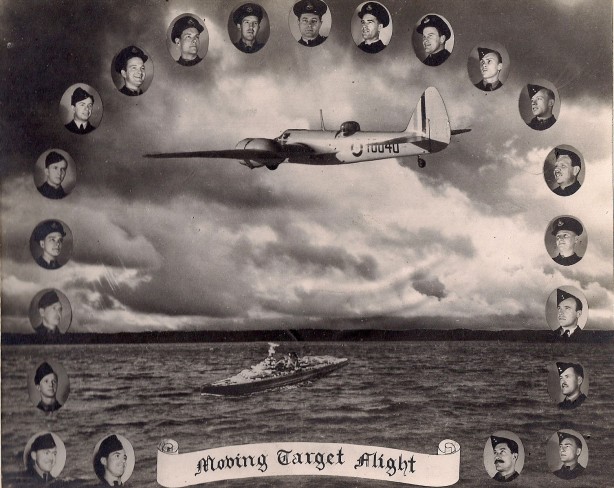 He was a staff pilot.

His application in November 1945 to stay as a pilot with the RCAF told which planes he flew. 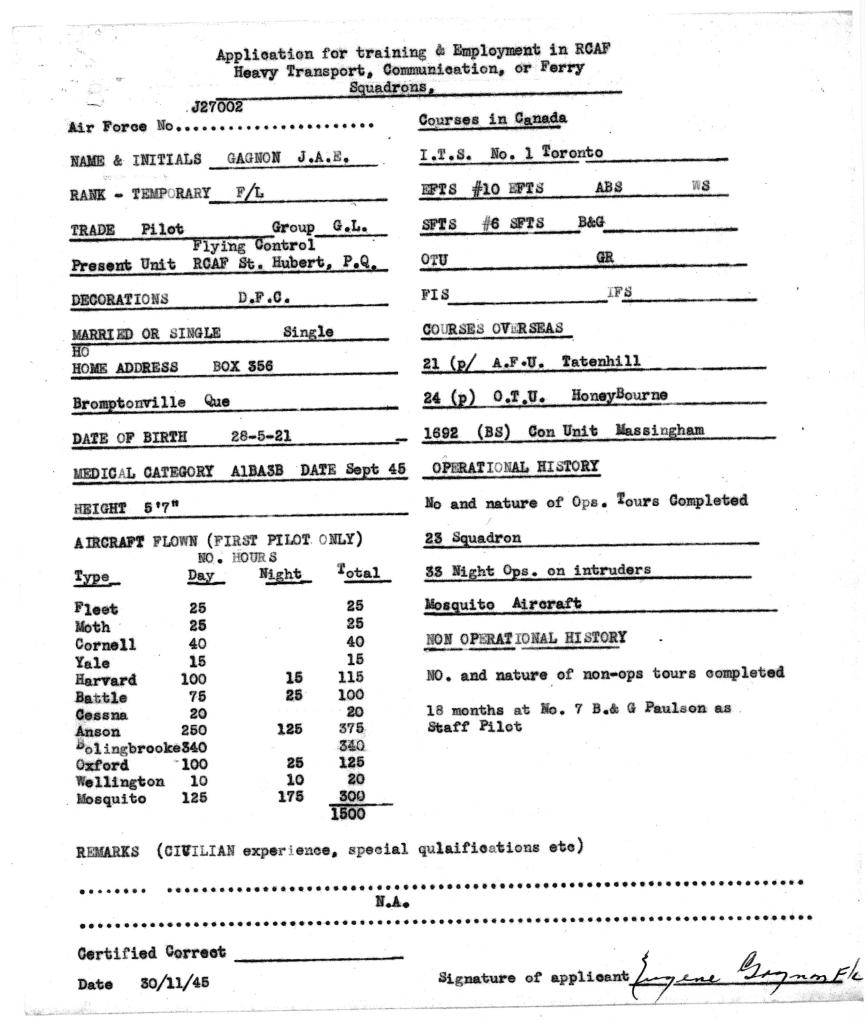 Being a staff pilot was not what Eugene wanted. Although an essential part of the BCATP (British Commonwealth Air Training Plan) most staff pilots and instructors were eager to go overseas.

He was TOS (Taken on Strength) at No 3 PRC Bournemouth.

This is what I wanted to show Jacques Gagnon. 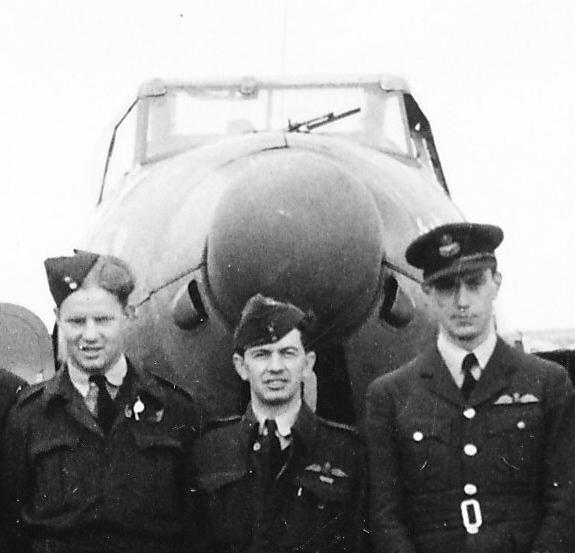 Jacques Gagnon knew everything about his uncle except his stay wih the RCAF as a staff pilot at Paulson, Manitoba… and then with 23 Squadron at Little Snoring, in England.

This is what Jacques Gagnon wanted to show me.

I found everything except Eugène’s precious logbook and war medals.

Simone Gagnon, Eugène’s sister, told Marcel Bergeron she has put them in the garbage after Eugène had died in a plane crash!

Afterwards, she told him, she had been crazy to do such a thing.

I am sure she did not realise that all of Eugène’s wartime memories had died by doing that.

63 years later, Marcel contacted me through a veteran who had written his memoirs. With Marcel’s memory and the discharge papers, I could start piecing together Eugène’s service with the RCAF by asking Archives Canada for his service record even though I was not related to him. I only needed a proof of his death. This is just a small part of what Archives Canada sent me.

part of the service record

Eugène would come back to Bromptonville after the war as a Flight Lieutenant.

Not as a hero.

Well of course his family was happy to see him come back alive from the war.

Eugène Gagnon, Georgiana (his mother), Wilfrid (his brother), Graziella (his sister), Odina (his brother), Simone (her sister)
In front, his niece Carmen

But people wanted to forget about the war, not only in Bromptonville but all over the world.

I can understand that.

Eugène never talked that much about the war.

Just enough so I could find everything about Eugène, even how he died on October 21, 1947.

I found everything about Eugène…

Well almost everything, except…

Before I knew about Eugène’s missions over Germany, this is the first thing I found about him.

Eugène was awarded a DFC.

So he had to have been a good pilot.

Since joining his squadron in December 1944, this officer has completed many sorties against a variety of targets.  His determination has been outstanding and his persistent attacks on enemy locomotives, rolling stock and road transport have been most successful.

One night in March 1945, he was detailed on a minelaying mission in a section of the Elbe River.  On the outward journey the starboard engine developed trouble but despite this he went on to accomplish his task in the face of heavy enemy fire.  On the return journey the starboard engine became completely unserviceable.  Height could not be maintained and the aircraft was forced down to 400 feet, becoming extremely difficult to control.  Displaying brilliant airmanship and determination, Flight Lieutenant Gagnon made a successful landing at base without injury to his crew and with but slight damage to the aircraft.  His devotion to duty has been most notable.

A year or so later, Mike Thomas sent me this document. He had information about Eugène’s missions.

Before I only had this to work on with. It was sent to me by Archives Canada.

Mike had much much more.

Information on all 33 missions!

F540 entry 27 March 1945.
F/L Gagnon and F/O Harris were detailed for an Anti-Flak patrol of Elbe River and Ludwigslust area. On the outward journey the CSU became u/s causing vibration of starboard engine, which developed excessively, so course was set for base. Eventually the engine failed completely. Great difficulty was found in maintaining height and at 4000 ft fuel tanks were jettisoned but only starboard drop tank released. Port engine started cutting 90 miles from English coast. This (trying to drop port tank) was repeated four time and 10 miles from the coast fuel tank unexpectedly jettisoned. R/T was very weak and communication to Coltishall was made through GOODCHILD 37 whose timely aid was very much appreciated. The Mosquito, on one engine, belly landed at Base (Cat. AC) and we are pleased to record that the crew were unhurt.

F540 Entry 12 April 1945.
Today F/L Gagnon was made the immediate award of the Distinguished Flying Cross for his very fine show on the night of 27/28 March 1945. Needless to say, there were great celebrations, which finally terminated at 0100 hours, on the Friday morning.

A young school boy 10 years-old looking at airplane models in the showcase window of a men’s clothing store. About 20 or so. I can still see them. This is how my interest for aviation and WWII began. Passion would be more appropriate.

So when Marcel Bergeron had asked me back in 2010 to help him find his hero when he was young, it was like a piece of cake. Well, not quite. This is all I had to start with. His discharge papers dated December 28th, 1945. A sad day in the life of Eugène as he tried to stay as a pilot in the RCAF. 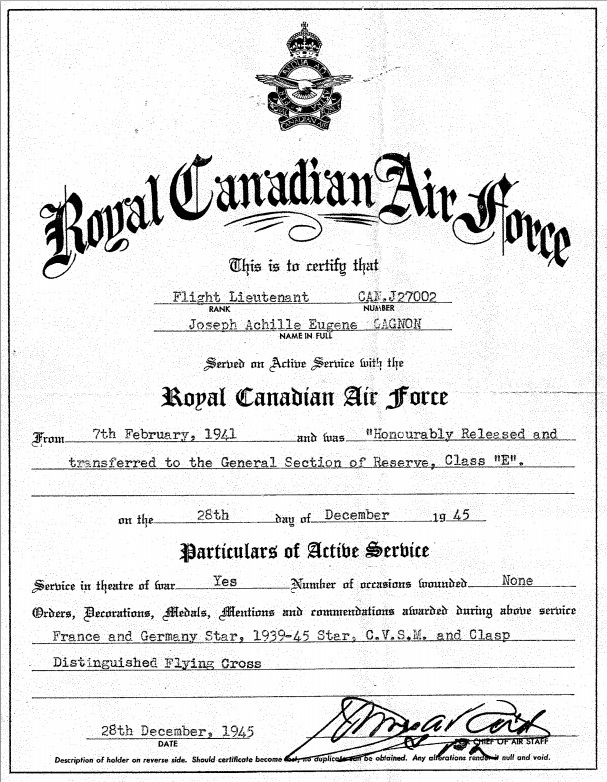 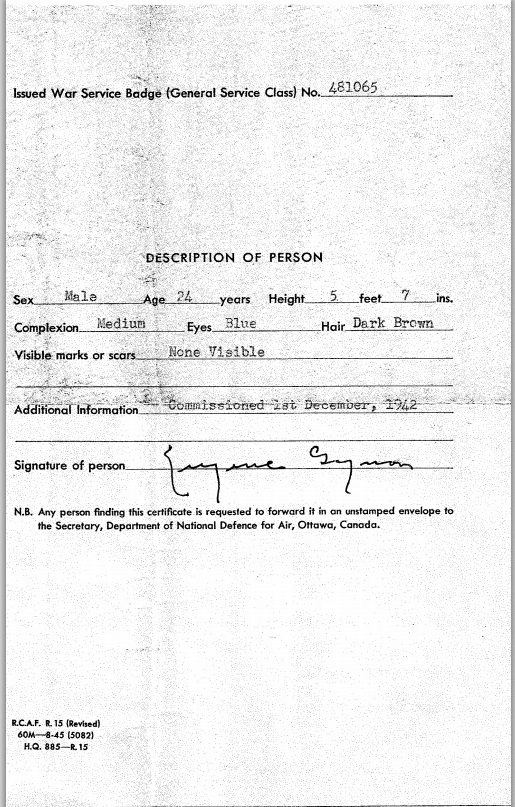 These discharge papers and some information Marcel had.

He told me his hero was a Mosquito pilot.

A French-Canadian Mosquito pilot from a little town I knew nothing about!

I got curious to say the least. So the search started with a visit to Bromptonville. I had to look at Google maps not to get lost on my way there. A little town with an unsung hero all but forgotten except for a name on a war monument.

Who has ever heard of Bromptonville in Little Snoring?

Who has ever heard of Little Snoring in Bromptonville?

Who has ever heard what happened in Little Snoring back in December 1944?

December 1944, the 5th of December to be more precise. Eugène Gagnon would take off for his freshman mission with his navigator F/O R.C. Harris on his right.

They were heading for Zuider Zee. They would do 32 more missions together before the end of WWII. 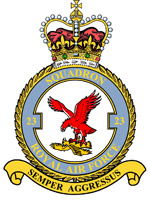 RAF 23 Squadron
Create a free website or blog at WordPress.com.