Peter Neil used the search engine on this blog to find all I wrote about his father.

I am one of Ron Neil’s sons, and recognized the photo having seen an original many years ago. My father died suddenly in 1969 (aged 46) but we were all well acquainted with his joining the RAF at a very young age. He didn’t make much of his war experience but we held him in some awe for his willingness to leave New Zealand, train in Canada and serve in Great Britain.

After having seen the worlds only flying de Havilland DH98 Mosquito(a FB Mk.26 fighter-bomber model with the serial number KA114) earlier this year in New Zealand over a 3 day period at Wings Over Wairarapa 2013 I was having some withdrawal symptoms and needed to see this beautiful machine fly again! I also have a special affection for this aircraft as a relative (Charles Scherf) flew them in World War Two and was one of Australia’s top air aces during this conflict, as such I had grown up hearing lots of stories about him and the “Mossie” from my Grandfather.  Given I am back in the USA I thought what better than to head to Virginia Beach to see her first public flying display in this country at Warbirds Over The Beach Air Show 2013 held at KA114’s new home the Military Aviation Museum.

After a seven year reconstruction and restoration by Avspecs Ltd. in Auckland, New Zealand a de Havilland Mosquito FB Mk.26 fighter-bomber, “TheWooden Wonder” took to the skies once again in 2012 appearing at a number of flying events around Auckland (the first flight was September 27th, 2012). This particular aircraft, serial number KA114, was originally built in Canada in 1945 (one of 338 Mk.26 built there) and is currently the only flying example of any Mosquito version in the world (the last other flying example crashed in the UK in 1996). The  good news is that in a few years there will be more flying with other projects in both NZ and the UK underway!

For me the “Mossie” has a special place as a relative, Charles Curnow Scherf was one of Australia’s… 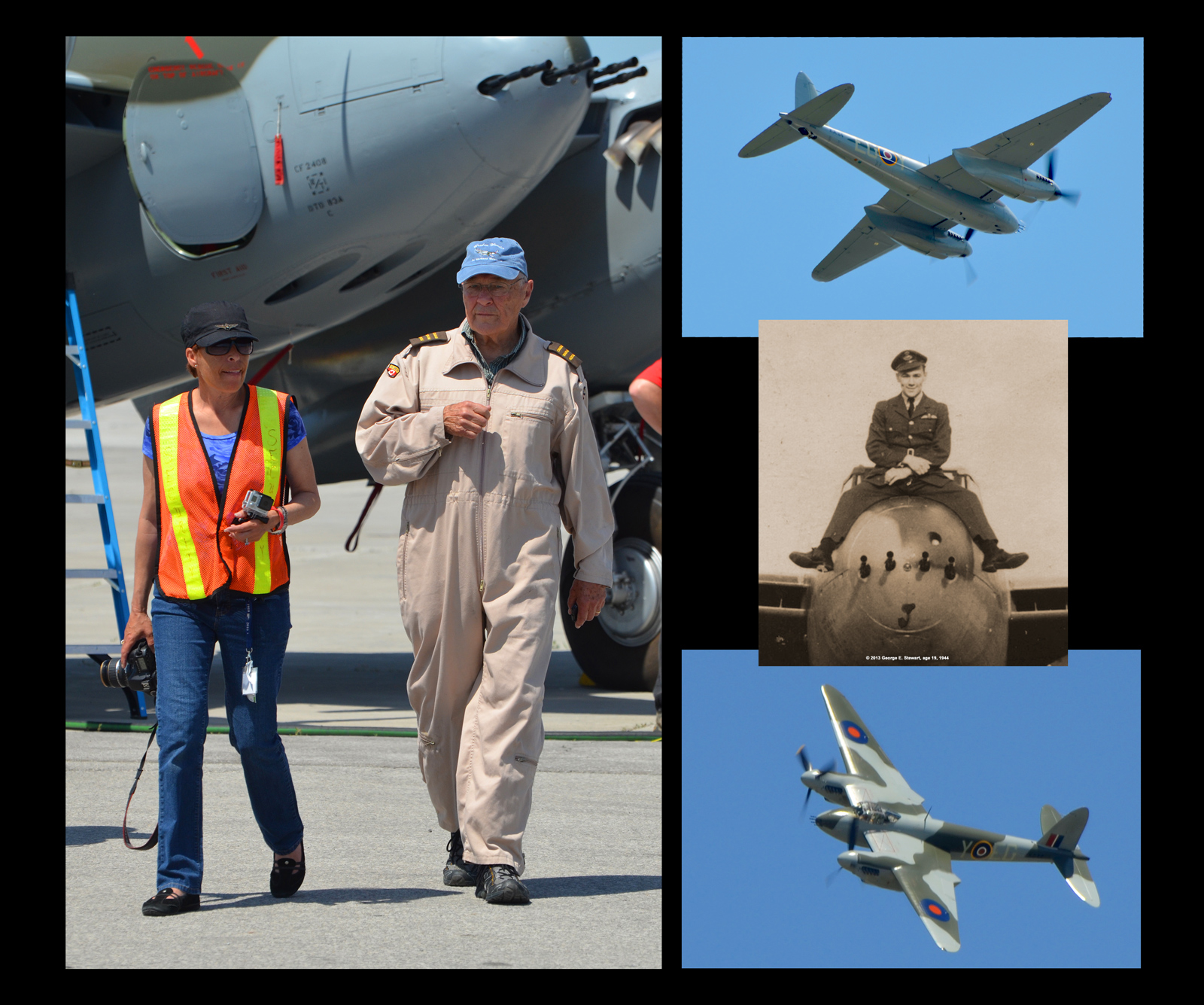 I TOOK BARB to the Hamilton 2014 Skyfest to see the Confederate Air Force B-24 (Diamond Lil), 419 Squadron Lancaster “Ropey” (temporary conversion of the Mynarski Lancaster), the T-28 Trojan Horsemen Aerobatic Team, and the, then, world’s only flying D.H.98 Mosquito (Military Aviation Museum) and I was very happy to see these rare, and dignified WW II aircraft. And that’s all I expected to see.

I was walking around talking, and taking shots when I thought I heard someone on the PA system say George Stewart.

I mean his appearance here, at Skyfest, made sense since George was consulted during AvSpec’s restoration of the originally Canadian-made Mosquito (Mossie) — so, of course— where else should George be? George flew down to Auckland during the Mossie’s restoration to give advice and flying tips. The Mossie is not easy to fly and will stall below 130mph! Scary? Yes!

And, of course, George was here to go up for a flight in the Mosquito, and of course, there was no one more worthy than THE MAN who flew 50 successful search and destroy missions over Nazi-occupied territory during World War II.

And true to form, George even did a wee bit of flying that there Mosquito (pictured in all 4 pics) when he was up in the wild blue today.

Who is George Stewart?

What is the D.H. 98 Mosquito (Mossie)?
The most lethal fighter/bomber/intruder aircraft of World War II!

Combat Capability: Fighter, bomber, reconnaissance — the Mosquito was capable of anything.

What the Distinguished Flying Cross Citation folk said about George Stewart:
“Flying Officer Stewart’s eagerness to operate against the enemy, his unflagging zeal and determination combined with his devotion to duty have won the admiration of all.”

What George Stewart said about the Mosquito:
“This is the diamond,”
“The most awesome airplane ever designed.”
“The Mosquito is, was and always will be magic.”

What Reichsmarschall Hermann Göring said about the Mosquito:
In 1940 I could at least fly as far as Glasgow in most of my aircraft, but not now! It makes me furious when I see the Mosquito. I turn green and yellow with envy. The British, who can afford aluminium better than we can, knock together a beautiful wooden aircraft that every piano factory over there is building, and they give it a speed which they have now increased yet again. What do you make of that? There is nothing the British do not have. They have the geniuses and we have the nincompoops. After the war is over I’m going to buy a British radio set – then at least I’ll own something that has always worked.

What is George Stewart most famous for?:
The late 40s Canadian Government GAVE over 200 battle-ready Mosquitos to the Chinese Nationalists who were fighting a tough, bloody, battle for democracy in China.

…and, as we all know now, a battle they sorrowfully lost.

The Chinese have been fighting for democracy EVER since.

Back in the day, with the sudden acquisition of 200 Toronto-made Mosquitos, the Chinese also a needed flying instructor. They didn’t think so. However, the RCAF knew the Mosquito was tricky to fly under 150 mph and absolutely unforgiving to flight novices. And, truth-be-told, the Chinese had already pranged a number of these gifted beasties, so yes, the Chinese Nationalists desperately needed an willing instructor to come to their war-torn country, but who? Who?

It should have been smooth sailing, er, flying … from there.

What isn’t well-known is the Chinese freedom fighters also had a tougher time than most, learning to fly these high-performance Mosquitos. The Mosquito was a flying thoroughbred, far beyond the tin cans the Chinese were used to flying.

Plus, and this was a big negative, actually … learning to fly these high-performance aircraft, the older Chinese pilots deeply resented learning how-to from a brash, noticeably younger (24 years old) Canadian pilot, George Stewart, and his also young assistant. I mean some of the Chinese pilots were almost double his age! In Chinese society one looks up to one’s elders, not, the other way around.

The George E. Stewart D.F.C., Chinese Nationalists, and the gift of two-hundred Canadian Mosquitos is far too big a tale to recount here. One final thing I will mention in lieu of the actual story, the Chinese invited George Stewart back to China (and he went), in the mid 90s, to reminisce about those “training days” with his former students!

What has George Stewart been up to lately?:

George has ALSO been providing consultation to AvSpec’s Mosquito restoration project, and as well, giving flying tips to that Mosquito’s future pilots. Remember, no one has flown, or seen a flying Mosquito in almost 20 years! and George has over a 1000 hours flying time on the Mossie. AvSpec’s Mosquito was later sold to

And this folks, this is the Canadian hero, George E. Stewart, D.F.C. you all saw at the 2014 Hamilton Skyfest this Father’s Day and probably knew nothing about. He fought the horror of the Nazis, and after a little break, took on a dangerous mission against Chinese Communism during the Cold War!

But, you know, that’s how real heroes are.

Humble, approachable, and often passing by in our midst, unnoticed —

AND SEE more about George and the Mosquito – thru a child’s eyes: www.canadashistory.ca/Kids/YoungCitizens/Profiles/2014/Ben-S

Amazing tribute on an amazing blog about aviation

Charlie was one of Australia’s  top 10 air aces in World War Two, with 13.5 aircraft shot down (some reports indicate 14.5) plus 9 destroyed on the ground and 7 damaged (with this tally he was ranked the 9th Australian overall  for aerial victories). This was achieved in 1943-1944 during 38 missions over Europe in which he covered an amazing 80,467 operational kilometres (50,000 miles) and never received even a scratch!

Charlie Scherf was also the first cousin of my Great Grandfather and someone who my Grandfather would tell me about when I was younger. Although my Grandfather never got a chance to meet him, he was a hero to him and later a hero to…